The screenplay is completed and has been submitted to various sources. 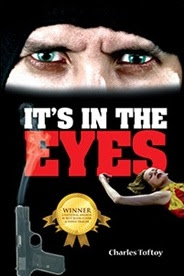 The Birth of a Screenplay

What happens when a couple of old college chums from over fifty years ago get together over coffee to swap stories?


After the first cup at Starbuck's, Chum #1 (that would be Dr. Charles Toftoy, Professor Emeritus at GWU) casually remarks that he has recently published two award-winning fiction thriller novels.


Ten minutes later Chum #1 has described the plot and characters of the first novel entitled "It's in the Eyes," based upon the old adage that "the eyes are the windows into the soul."


Sleuth Lars Neilsen, supported by his crack Alpha Team of three experts, has trailed not one, not two, but four sadistic psycho murderers whose wave of terror extends throughout D.C., Northern Virginia, the Maryland beaches, and to Ireland as they target and kill four female students at various universities.


Chum #1 concludes his summary with "I'm now looking to make this first novel into a feature film or mini-series, but am not certain where to begin."


Chum #2 then casually remarks, "Well, since retiring from the Army, I've spent over thirty years as a film and television actor, working with all types of screenplays, some very good, some very bad. So I'm qualified to write your screenplay, if you like."


Six months later Chum #2 has completed a first draft in four parts, which is edited, copyrighted, and registered with the Screen Writers' Guild of America. Now we need an agent with contacts in the film-making industry to represent us.


Any of you readers who are, or know of, an agent or manager who might have an interest in such a project, please contact Chum #1 (Chuck) at charles.toftoy@gmail.com or Chum #2 (Don) at moncuredon@yahoo.com.
Email ThisBlogThis!Share to TwitterShare to FacebookShare to Pinterest
Home
Subscribe to: Posts (Atom)